Westie in the U.K. by Dr Dinah Parums 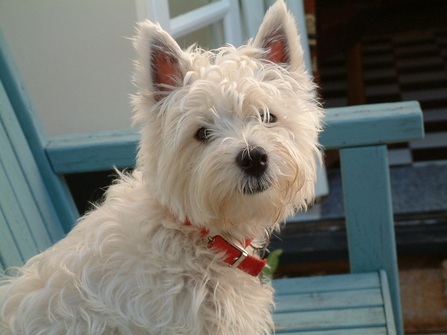 The "West Highland White Terrier" or "Westie," is also called by other names: "Highlander" or "Potlatch terrier," or "Roseneath terriers," (from the Duke of Argyll’s estate). In the U.S they may also be known as Scottish terriers, little Skyes and little Cairn terriers.

The ‘Scottish terrier’ was unknown outside Scotland until the 1870s, when Captain W.W. Mackie brought them to England.


The modern Scottish terrier was bred by the founder of the Scottish Terrier Club of England,  J. H. Ludlow.


In Scotland, Colonel Edward Donald Malcolm, of Poltalloch in Argyllshire, is credited with breeding the first truly white Westies, originally called the Poltalloch terrier. The colour white was bred so that they could be easily seen when out in the countryside.

In 1909, they were officially classified as the ‘West Highland white terrier’.